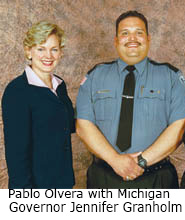 Pablo Olvera, (CJ’94), was named the 2004 Corrections Officer of the Year for the State of Michigan. He also was recognized for being among the top five officers nationally. Some of the reviewed include work ethic, communication skills, professionalism and ability to exhibit sound judgment in emergency situations.

The latter is no problem for Olvera.

On News Year’s Eve while intervening in a fight between two prisoners at Saginaw Correctional Institution, Olvera’s awareness of the situation saved his life.

“It took place in our big yard,” explains Olvera. “I had one guy up against the fence and was trying to handcuff him. The other prisoner was struggling with my partner and got away from him. I turned to my left and saw the guy had a shank [hand-made knife]. I grabbed his hand and pushed him back, but he was already swinging.”

The move kept Olvera from being blindsided and also protected the other prisoner. Luckily, although the shank hit Olvera in the shoulder, it was deflected by a buckle on his overalls.

“We took both prisoners down, handcuffed them, then I asked my partner if I was bleeding. That’s when I saw the buckle was bent. The whole experience didn’t hit me right away. I just said, ‘Hey, I’m alright – let’s go back to work.’” Which is just what he did.

Olvera also was instrumental in reporting the hijacking of a sheriff’s van and organizing fundraisers for the families of corrections officers who met untimely deaths.

“I like the people I work with – they’re people I can trust,” says Olvera. “With the prisoners, too, I feel I’m doing something. I tell them, ‘Hey, you made a mistake in life. You’re here now; get your education.’ I try to tell them positive things.”

Olvera credits his Sociology and Psychology classes at Ferris with helping him to relate to the prisoners – although he admits they were his toughest classes. He also credits his Criminal Justice professors including Terry Nerbonne, Frank Crowe, Robert Parsons and James Rowell. “The training they gave me really helped out in my career,” Olvera says.

In addition to his studies, Olvera began dating his future wife, Elsa (Ortega) Olvera while at Ferris. She is completing a Ph.D. in Education at Wayne State University. She’s a Project Source Specialist working with at-risk and truant students in the Saginaw Public Schools system.

Olvera took part in national awards events April 30-May 2 in Washington, D.C., and the state awards ceremony in Lansing on May 5.