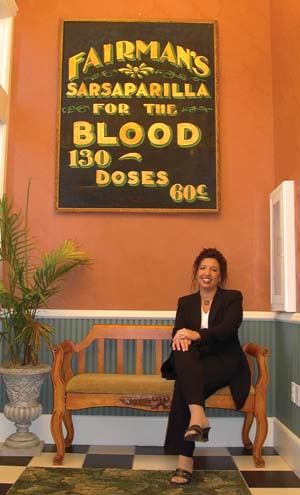 The Fairman and Nisbett buildings have played a central role in the history of Big Rapids. Both built on the site of Mecosta County’s first hotels (and, in the early 1860s, two of the few in central-northern Michigan), the venerable buildings have survived fires, bankruptcies and cycles of economic boom and bust.

Today, the historic structures have entered their newest phase as the Fairman- Nisbett Residences—well-appointed living space for senior residents.

Maintaining the historic feel of the buildings while accommodating the needs of seniors is no easy feat, but with similar projects successfully behind her, Lisa Wall (K’99) has transformed space that in the past has been everything from boarding rooms to retail stores and a billiard hall, into apartments that combine history, beauty and function.

More Than Meets the Eye

“Basically I coordinated the finish of anything you see beyond the drywall,” says Wall during a walking tour of the newly opened Nisbett Building. “Finishes, furniture selection, coordination of colors, and development of the themes and concepts for the rooms. Any time you’re merging various styles and not just starting from a clean slate, you have more challenges in a project.”

Although only five years out of undergraduate school, she is already a veteran designer. By the time she graduated from Kendall College of Art and Design, she already had a full client base while working for another company. Wall designed senior housing interiors during her junior year and her senior thesis was a working project—the restoration of a train depot that had been turned into a private home. Another high-profile job for Wall was finished last summer when she completed the design – from bricks to paint, and from lighting to furniture – of a 14,000-square-foot residential project, the largest ever to be included in Grand Rapids’ Parade of Homes.

Unlike working in new construction, with historical renovations the designer has predetermined spaces and architectural details and features to work around. Original molding, hardwood 10-foot doors and masonry were refurbished. The granite and masonry exterior, detailed metal facade and hallmark clock in the building steeple command an imposing presence, but all were suffering from neglect. Despite the challenges, Wall says the process went smoothly.

“This project didn’t seem difficult since I had such a passion for the restoration. It was easy to get swept up in the enthusiasm of the community, and I wanted to create something special for the residents and community – something to be proud of,” says Wall.

The Fairman-Nisbett buildings also owe their renovation to another Ferris grad. While Wall transformed the interiors, Pat Birtles (T’70), of the architectural firm Birtles-Hagerman-DeKryger, tackled the difficult problem of blending historical accuracy with present-day needs at a structural level.

“He did a magnificent job creating the spaces within the building,” says Wall. “Without his work, none of the rest of this would have been possible.”

The historical aspects of the two buildings reach back to the earliest days of Big Rapids, which has landed them on the national registry of historical places—the only two buildings in Mecosta County to be so designated.

The Nisbett Building, named after William F. Nisbett, occupies the site of one of Big Rapids’ first homes, built by Augustine N. and Katherine Williams who moved to the rugged area in 1856. They soon began taking in lodgers. Between 1858 and 1883 through various owners and additions, the building was known successively as the Stearns House, Darling House and Pacific House. In 1903 Nisbett, publisher of the Big Rapids Weekly Herald, purchased the building that stands today (minus an east wing lost in a 1929 blaze) from its creator, lumberman Daniel F. Comstock, in a foreclosure sale.

The Fairman Building rose from the site of Big Rapids’ second-oldest hotel, the Montreal House built in 1860, which fell to the work of an arsonist in 1879. Within months of the blaze, investment banker Ferdinand Fairman began construction of the building that would bear his name. In addition to rooms for lodgers, some of the earliest businesses to sign leases for space in the building included drug, clothing and jewelry stores, as well as Z. E. Bloomburg & Co.’s Tobacco Store and Billiard Hall.

Both buildings contain many traces of their origins, including the original plaster-engaged columns and pressed tin ceiling of the Nisbett Building’s lobby, although now residents make their way to the upper floors by elevator rather than the former central staircase. The interior had to be completely modified to accommodate barrier-free accessibility to the second and third floors while maintaining the integrity of the original structure.

Perhaps the happiest blending of past and present in the Nisbett Building are the common areas, which recall its past use as a public house.

“There are center areas on the second and third floors, and we wanted to develop spaces for the seniors to gather together and enjoy themselves on their own,” says Wall. “We have an indoor gardening center, home theater area, billiards room and art gallery. We wanted to create an environment where residents could flourish.” There is also a room where grandchildren can entertain themselves with games and videos, a computer lab, as well as rooms for art projects and health screening. In addition to such amenities as a fireplace and tables for conversation or board games, Wall has decorated the room with framed postcards of historic Big Rapids scenes.

Wall’s efforts go beyond the purely aesthetic. In addition to the historic elements of the two buildings, she was equally mindful of the needs of its senior residents. She worked to create spaces conducive to healthy lifestyles, vitality and wellness, and to encourage relationship-building among the residents.

“Each floor has a different color theme—that’s one of the elements you use with senior housing,” notes Wall. “A different color theme on each floor creates a distinct space and acts as an identifying factor, as well.” The bold use of color also lets each space make a statement of overall grace and integrity respective of the architecture.

Bowing to necessity doesn’t mean the apartments or common areas have become homogenized.

“All of the apartments are different in size and shape,” Wall points out. “No two are alike, so they have their own character. These three-story buildings would be four-stories in today’s construction, the ceilings are so tall. And the windows are all original. We replaced the glass, but left the original sash and woodwork.”

When the Nisbett and Fairman residences had their grand opening to the public July 31 through Aug. 3 last year, 2,000 people toured the buildings to see the renovations and check out the apartments. In the weeks that followed, the buildings began quickly filling up.

“We keep renting the models, but that’s a good problem to have,” says Mark Sochocki, executive director of the Big Rapids Housing Commission.

Sochocki and Wall are walking through the Nisbett Building, attending to final details.

A resident who is already settled in invites them in to her living room overlooking Michigan Avenue.

“I love my apartment. I’m home here,” she says. “My place is just wonderful, and I love the billiard room upstairs. Whoever worked on it, I give them my heartfelt thanks, because it’s so well done.”

Without realizing it, she’s just given Wall her thanks in person.