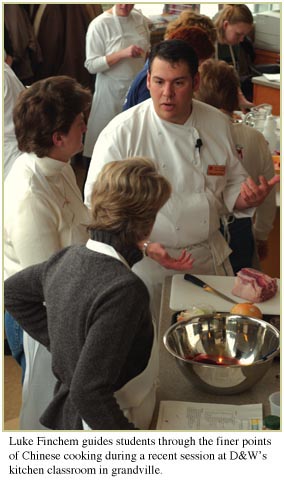 Twenty-four students are hard at work on their classroom projects. They chop scallions, cut up mushrooms or slice tenderloin for Char Shue—twice-cooked pork. Others are following recipes for Thai Fried Rice, General Tsao’s Chicken or Golden Tiger Dumpling Soup.

The class is Chinese Restaurant Overhaul being taught by Luke Finchem (EHS ’88) in the kitchen-classroom at the D&W supermarket in Grandville, Mich. It’s one of almost 70 different offerings from D&W’s Chef’s School during their winter schedule that runs from January through April.

There are various island counters at which students prepare their dishes. Some tend woks at a row of high-end retail stoves with burnished-steel hoods housing exhaust fans. Others wander to a nine-tier bookshelf filled with spices and oils, or select a knife from those lined up on magnetic wall holders.

Finchem moves from counter to counter answering questions and offering suggestions—sometimes turning on the microphone he has clipped to his white chef’s smock to explain some technique to the entire class.

It looks like a special audience-participation episode of Emeril Live, or maybe the Galloping Gourmet.

“My family and friends are always ribbing me,” Finchem says. “They ask me if I’ve got my own show yet. I tell them I’m on the hunt for a producer.”

The supermarket chain started the Chef’s Kitchen program in fall of 2002 with the help of Ferris grad Bob Garlough (EHS ’92).

“There’s a growing interest in cooking in the United States,” he says. “It’s not as much sustenance anymore as it is entertainment. Around the country the higher-end and service-oriented stores are starting these kinds of programs

to meet their customers’ needs.”

Garlough certainly has the right background to help a program like Chef’s Kitchen be sure it has all the ingredients for success.

In 1980, he was hired to start the Culinary Arts program at Grand Rapids Community College. A decade later, GRCC partnered with Ferris State to open the Applied Technology Center, which resulted in additional instructional space and kitchens.

With new kitchen and instructional space available in the evenings, Garlough helped launch the Institute for Culinary Enthusiasts.

“The idea was that we would offer non-degree cooking classes for fun and give the public a chance to use some of the facilities their tax-dollars helped to fund,” Garlough explains. “GRCC has done that successfully for 13 years now. With a market for more seminar-styled cooking classes in West Michigan, D&W decided to open a cooking school, which they asked me to help set up. So now both cooking schools are flourishing, which speaks to the need in the community for these kinds of classes.”

Although Garlough started the Culinary Arts program at GRCC, which he headed until 2000, he didn’t have an advanced degree.

How does someone develop a taste for a career in food?

“Food was central to our family, but I never considered it as a way to make a living,”Garlough says. “Then during high school, I had a job working in a restaurant and loved it. I went on to college as an English major, but I didn’t know what to do with it. I kept coming back to that job I had in high school, so I looked up culinary schools and applied. It was the best thing I ever did.”

For Finchem, the culinary life runs in the family.

“My dad was in food service for about 30 years and an older sister for probably 20 years,” says Finchem. “I went into Food Service Management at Ferris. I’ve done a great deal of it and I like working with people—but cooking transcends everything, so I really enjoy teaching the Chef’s Kitchen classes. Teaching gives me a creative outlet.” 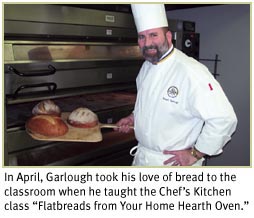 That creativity extends to Finchem’s interest in “fusion cuisine”—combining different culinary traditions in a single recipe.

“In class, I can say this is a great way to do this marinated Jamaican Jerked Chicken, but we’re going to make it today with a Vietnamese or Thai-influenced pineapple slaw,” Finchem explains.

Outside of the classroom, Finchem’s tastes include dishes not quite so esoteric. “I’m a sucker for great barbecue. Someday I plan to organize a wonderful southern or western barbecue tour.”

Traveling in search of great food and new recipes has been an essential ingredient in GRCC’s Culinary Arts program for three decades.

“In 1984, the first year we organized a trip, we went to Germany and France,” says Garlough. “Last year we went to a culinary school in Paris, and another in Malta. This year we spent three days in the Piedmont region in Italy, where we took cooking classes, and visited wineries, olive oil factories and cheese farms. Professionally, I’ve always loved Mediterranean cooking, so the trip was great in that sense. Although now I’m teaching baking, and I love artisan breads. There’s something very elemental about a good loaf of bread.”

A Taste of the Future

In 2000, Garlough stepped down as department head to concentrate on teaching. He also is putting his English studies to good use. He has contracted with Thompson Learning to write three culinary books. The first of the three, on ice-carving, came out this last summer.

If publishing is in Garlough’s future, could that TV show be in Finchem’s? Last Valentine’s Day, a local television station filmed Finchem as he made holiday treats at the cooking demonstration station in D&W’s Cascade store.

With a few deft moves, Finchem fashioned an appetizer in the shape of a heart out of two blocks of cream cheese and a jar of ancho chili pepper sauce. Then, to highlight a new product, Finchem created a pan of gnocci in freshwater lobster-tail sauce, which he served in sample portions to passing shoppers.