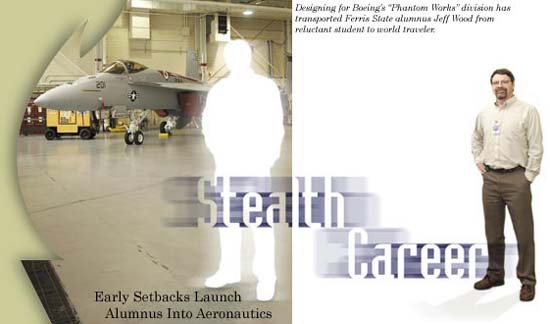 There's one in every class - a kid who draws ships and airplanes instead of memorizing state capitals. Jeff Wood (T'77) still gets to design things like destroyers, submarines, amphibious assault vehicles and hovercraft, and he gets to see them built from his cutting-edge designs. Plus, he works for a division of Boeing called Phantom Works in St. Louis, Mo.

How cool is that?

Wood is something of a reluctant visionary. After high school he didn't think he wanted to go to college. "I really had no interest in pursuing my education, so I declined my mother's generous offer to pay my way," Wood remembers. "I proceeded to get one of those exciting jobs as a stock boy at a local department store and then a job as a machine operator in a local factory. My attitude changed three years later, when I found myself unemployed and with no appreciable skills."

Because Wood enjoyed the drafting classes he took in high school, he enrolled in Ferris' Technical Drafting and Tool Design program. During the winter of his last semester, he was standing with a friend in front of a bulletin board in the Placement office. McDonnell Douglas Aircraft was looking for a tool designer to work on F-15 fighter jets. "We both had the same thought: 'Wow! What a hot job that would be, but we're just a couple of country boys,'" Wood recalls. "My friend walked away, but I didn't. I proceeded to hand-write my first resume." It would be the only resume Wood had to submit, because McDonnell Douglas contacted him with a job offer even before he graduated.

Within a week of graduating, Wood packed his bags and moved to St. Louis, Mo. Two years later, layoffs caused Wood to take a hiatus from working on jets. After eight years with Sunnen Products working on honing machines, Wood got the chance to again work on his beloved aircraft. "No company could peg the fun-o-meter as well as a company building fighter jets," Wood says. He went back to McDonnell Douglas Aircraft who eventually got bought out by Boeing. He's been there ever since.

Back at McDonnell Douglas, Wood moved from tool design to learning aircraft structures design. He worked on flight test aircraft for the Israeli Air Force and then transferred into research and development-The Phantom Works. Some of the projects have required Wood to obtain Secret Clearance from the Department of Defense.

Today Wood's major project is called Next Generation Transparency. The NGT project is exploring new ways to design and manufacture aircraft canopies-the "bubble" that a pilot sits under. Currently, a flat sheet of acrylic is heat-formed into a mold and then hand-polished to obtain an optically clear lens. Wood says the current process is more of an art than a science, which accounts for why a canopy can cost upwards of $300,000.

The new approach Wood is pioneering is to make a frameless polycarbonate canopy from an injection mold. One of the problems is how to attach something without a frame to an aircraft. Wood compares it to trying to hinge windows to open and close without a window frame. "Our designs allows us to integrate latches and hinging right into the polycarbonate," he says, "so the only thing that opens is the 'plastic' itself." Redesigning both the canopy and the manufacturing process could drop the cost of canopies to a tenth of their current price.

The project has made extensive use of rapid prototyping. The next generation of designers studying at Ferris will have hands-on experience with this 3-dimensional drafting tool. A year ago the University acquired a $60,000 Stratasys Genisys, which converts computer-aided drafting images to reality by depositing layer after layer of a white thermoplastic material in ultra-thin layers as specified by the drawing. Wood's old college friend, and now Ferris professor Mark Hill, teaches the new technology. "With this process you can press a button and go do something else and when you come back, the part's done," Hill explains. Wood used rapid prototyping models of the new canopy to impress Air Force brass with project breakthroughs.

When he's not designing the core of a nuclear fusion reactor or an Unmanned Combat Air Vehicle, which promises to be the future of air defense, you might find Wood behind bars. For more than four years he has been leading a Bible study group for prisoners. "They are the cast-off, forgotten segment of our society that no one wants to see again," Wood says. "One day one of these men might end up being your neighbor, and you'll be glad someone took the time to care for them."

It's just as likely, though, for Wood to be traveling in support of one or the other of his high-tech projects. One of his most memorable trips included being entertained by Finns at a company sauna on the Baltic Sea. "Of course, no sauna is complete without jumping in the sea afterwards," Wood says. He calls going from stock boy to Phantom Worker, "something of a fairy tale story." Not that most fairy tales end up in saunas on the Baltic Sea-only the best-designed ones do.