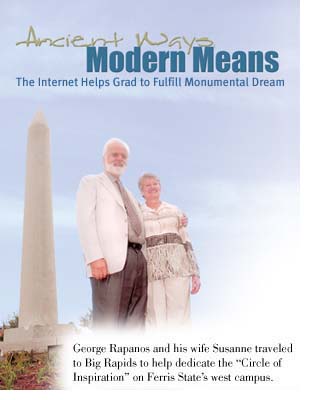 You might call it coincidence or serendipity. The psychologist Carl Jung dubbed it “synchronicity.”

The retired pharmacist and practicing poet had been contemplating construction of an obelisk dedicated to the memory of his parents Alexandros Nicolaous Rapanos and Nicoleta (Agnostropoulos) Rapanos, and other immigrants to America. He envisioned a single piece of granite three feet by three feet and 30 feet tall.

He was told it couldn’t be done in one piece.

Then he saw the film “Pharaoh’s Obelisk,” which was a segment of the public television show Nova’s series, “Secrets of Lost Empires.” The film documented three separate attempts to erect a 36-foot-tall, 30-ton monument-quality needle of carved granite using only those means available to ancient Egyptians. The first two attempts in Egypt failed, but a third attempt in the United States succeeded.

Rapanos contacted Fletcher Granite Quarry in Chelmsford, Mass., where the successful raising took place, to see if they could make one for him. The company told him he could buy the very obelisk that had been featured on Nova—it was being auctioned on e-Bay.

“I became the successful bidder,” Rapanos says. “It seems as if an innermost being was irresistibly drawing me in the direction of what I believe to be my destiny.” Rapanos’ purchase of the obelisk also contributes to Nova’s mission to further science literacy. Ten percent of the proceeds of the sale went to benefit an inner-city school in Manhattan whose students are largely children of Dominican Republic immigrants, and the remainder was used for the production of other documentaries.

“I was looking for a location in my home town of Midland,” Rapanos says. “Then I was having dinner at the annual Presidents Club get together. I mentioned what I was attempting to do and President Sederburg said, ‘Let’s do it here.’”

Rapanos’ dream became real when the obelisk was raised (with modern equipment and carefully, since granite is susceptible to stress fractures) in Bond Circle where it is the center of the “Circle of Inspiration.” The entire project includes the obelisk, granite benches, landscaping and bronze plaques featuring poetry—some of it Rapanos’ own.

One of the seven poems on the plaque featuring his work, “Meditation,” begins

Close your eyes and there lament.

It’s a poem he wrote after a trip to India in 1998—a trip that had a profound impact on Rapanos. A cousin of his heads an ashram there and feeds, clothes and educates more than 40 children from the area.

“You can talk all you want and it changes nothing,” he says. “So now I’m trying to do these things. What I want is to inspire love and transcendence in people.”

The inspiration Rapanos hopes to give to others can be both fragile and lasting—not unlike a 30-ton slab of granite.

Rapanos recalls writing one of his longest poems, “Pilgrim’s Quest,” in a single sitting after attending a class on Sufism (a mystic sect of Islam) where they discussed the work of the 13th century poet Rumi.

“I went home, meditated and then wrote,” he says. “One verse after another was just coming to me.” Rapanos eagerly shared the new poem with a Muslim friend of his downstairs from his New York apartment. Then, like the English Romantic poet Samuel Taylor Coleridge who was unable to complete his famous poetic fragment, “Kubla Khan,” the couplets were no longer there when Rapanos returned to his desk.

“I couldn’t write another word,” he says. “That’s what I mean when I say you have to do it by inspiration.”

The Egyptians, who first raised their monuments 1,500 years before the birth of Christ, erected the massive monuments to honor the sun god Ra.

Rapanos sees the same sort of symbolism in the Circle of Inspiration’s obelisk.

“The obelisk represents the ray of light coming from God and light in all mankind,” he says.

Rapanos credits several people at the University for helping to make the project a reality, including Artist-in-Residence Robert Barnum, Assistant to the President Dan Hurley, Director of Planned Giving and Development Debra Jacks and President William Sederburg.

Although the project is not a part of the University’s Art Walk, the President paid tribute to the project’s similar goal. “This project represents a significant step in our efforts to extend the presence of art to west campus,” he said.

In the future more poems will be added to the plaques, making the Circle of Inspiration a living part of the artistic community.

Whose poems will be celebrated? Perhaps Michigan poets, perhaps poets not yet born. Perhaps poets inspired by a type of monument conceived by Egyptians 2,500 years ago to worship the sun god and erected in the 21st century as a reminder of the light inside us all.