I remember my first time—the big glass doors opened on this huge store where you could buy groceries and school clothes and toys and tools. Meijer Thrifty Acres—or Fifty Acres, as I called it, because it seemed that big. You could get everything there—they even cut hair and repaired shoes. I remember the produce section—who knew there were so many kinds of lettuce? 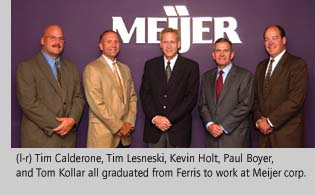 My young son knows the company’s slogan—“A Million Reasons, A Single Store”—from its sponsorship of PBS programs like “Barney” and “Caillou.” He loves the lobsters, with their claws kept closed with blue rubber bands; the silvery fish staring from the meat case; and the toys. He sees the red block letters across the storefront and grins.

“Meijer!” he proclaims in his toddler’s voice. “A million raisins, a stinkle star!”

When Meijer opens a store, it makes an impact. It has been this way since 1934, when in the midst of the Great Depression, 50-year-old barber Hendrik Meijer bought $338.76 of merchandise on credit and started Meijer’s Grocery in Greenville, Mich. The company grew, and in 1962, opened its first “Thrifty Acres,” a food and general merchandise combination store in Grand Rapids.

Today, with 156 stores throughout the Midwest, Meijer employs tens of thousands of workers, from baggers in their teens to post-retirement greeters. It also hires a fair number of Ferris State University grads, including five of its current VPs as well as new President and COO Paul Boyer (Business ‘68), who took the helm with the new CEO Hank Meijer in February. Outgoing President and CEO Jim McLean is a Ferris alum, as well—College of Business Class of 1967.

Boyer came to Meijer during Christmas of 1970. A young husband and father pursuing his MBA, he needed some extra money that winter.

“That was going to be my 12 weeks at Meijer,” he says. “I was bouncing around—working in loss prevention, jewelry, shoes. When it was time to go back to school, the manager said he could work it out so I could work part-time, around my classes.”

Boyer continued working part-time at Meijer—until he was approached by management to be a training director in Grand Rapids. Within six months Boyer became the corporation’s first director of labor relations, and he has continued to advance in the company for the past 30-plus years.

“I kept gaining increased responsibility and having fun,” Boyer says. “When you have a job in which you can advance and enjoy yourself, what more can you ask for?”

Boyer is joined at Meijer by fellow Business alumni Kevin Holt (Class of 1982 – senior vice president of operations) and Tim Calderone (vice president of supermarket/health and beauty care operations), who attended Ferris in the early ’80s studying business administration. The balance of the Ferris alumni in executive positions at Meijer are Pharmacy graduates.

Vice President of Pharmacy Mike Major graduated from Ferris in 1975 and oversees the pharmacy operations of all Meijer stores. Major is the only one of three College of Pharmacy VPs at Meijer still working in his field of study. Alumni Tom Kollar (Pharmacy ‘82) and Tim Lesneski (Arts, Sciences and Education/Pharmacy ‘86) have moved on to become regional vice president of operations for west-central Michigan and vice president of merchandising, respectively.

“Wall to wall, ceiling to floor, door to door,” Kollar says, describing the range of his responsibilities. “Everything from bringing products in through the back door to moving them out through the front. It’s very people-intensive.”

“Pharmacists can do other things,” says Major. “I think there is an inherent tendency toward leadership—as a pharmacist, you really hold your customers’ lives in your hands. You need to have that confidence to do your job well and relate well to people.”

Lesneski handles company-wide purchasing for nine departments, one of which is prescription drugs. That finger in pharmacy might seem like a slim connection, but Lesneskihas always had multiple interests.

“I came to Ferris to get a pre-med degree in Applied Biology—I was going to get a pharmacy degree in order to pay for med school. I was always interested in the business side of pharmacy, however. The more I saw of it, the more it appealed to me.

“The Meijer team doesn’t look to hire just pharmacists,” he explains. “They look years out, at what a person can become. Our pharmacy leadership has a knack—they don’t just look for good pharmacists, but good leaders.”

According to Lesneski, Ferris emphasized the importance of a strong business background in pharmacy.

“That’s not always true, but at Ferris, it’s a part of the curriculum,” he says. “Ferris has more of a business spin, which means greater business opportunities.”

Or as Kollar puts it: “Most doctors can’t step out of their offices and run a business.”

Both Kollar and Lesneski came to Meijer as pharmacy interns and made careers there. Boyer came as holiday help and worked his way through the ranks, and Calderone, who came from the fast food industry, always had his eye on Meijer as the key to his future. All share a common view of Meijer as a company that weighs the potential of employees more than their background.

“I was very interested in coming to work for what I viewed as a great ‘people’ company with high values for doing the right thing,” Calderone says. “My path to my current position took me through many different aspects of our organization, and the opportunity to experience different facets of such a large and diverse company helped me grow as a person and a leader.”

“I think the culture here is that what you can do is more important than where or how you have been trained,” says Boyer. “It’s a culture that realizes that leadership skills are transferable.”

“With all these different opportunities, the company really fosters a culture of growth and promotion from within,” he says. “Why try to recruit someone from the outside when you already have the talent? And as for Ferris grads—they’ve been tried in various positions and they’ve been successful. So why not?”

That Meijer believes in Ferris is evidenced by its recruiting. According to Major, 50 to 60 percent of the company’s pharmacy recruits come from Ferris—and Meijer actively recruits Ferris graduates in other fields. The company also supports the University through donations of scholarship funds and equipment.

“We share a number of characteristics with Ferris,” says Holt. “We are West Michigan-based. We share a desire to see that the curriculum ensures programs are the best that they can be. We want to make certain that when students graduate, they can hit the ground running, and we believe that internships make better students—which in turn make better employees.”

The new Meijer store open in Big Rapids now means a new level of cooperation and involvement, from supplying current students with jobs, internships and back-to-school supplies to financial and volunteer support for community initiatives.

“One of our founding fathers, Fred Meijer, teaches us to form win-win relationships with our communities,” Kollar says simply. “We rely on each other.”

“The foundation of our philosophy is to not only be an active business in driving the local economy, but to leave a positive impact on the people that we serve,” says Calderone. “The benefit to Meijer? Loyal Meijer guests shopping our stores, with loyal Meijer team members serving their needs. It is a great formula.”