In the beginning, Industrial School students attempting to be accepted by other colleges and universities had been a thing to reckon with. W.N. Ferris said it took him 10 years to gain any kind of acceptance credentials for his students from other schools. Actually it took considerably longer than that, but he plugged away at it so that eventually other institutions took the Industrial School's offerings credit for credit.

In the late 20's and early 30's college administrators began making overtures to get the school's Junior College accredited. The former name of the School of General Education, the Junior College was a launching pad for Ferris students to the universities. Even benefactor W.K. Kellogg of Battle Creek got into the act. On Aug. 9, 1928, he sent a telegram to Masselink which read: 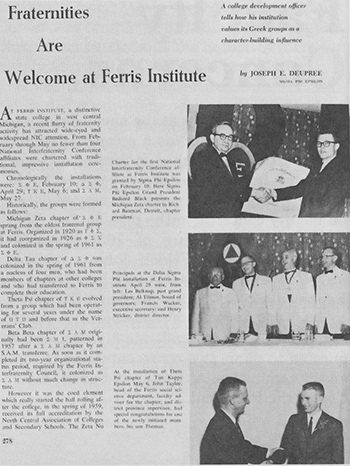 When Ferris was accredited in 1959, it opened the doors for national fraternities and sororities to charter groups on campus. National Greek organizations would not authorize chapters at non-accredited schools. This is a page from a Greek magazine describing the charting of a number of new Ferris fraternities.

Mr. Masselink replied: ". . The University of Michigan sent out a report to all of the colleges in the Northwest . . . Graduates or credits from the Ferris Institute are accepted hour for hour providing . . . that Pomona College belongs to the Association."

Ferris had been paying dues to the Association of Colleges and Secondary Schools for several years, and in 1934 was ready to make a concerted effort to have the Junior College accredited when the Board of Incorporators, either through neglect or lack of funds, failed to pay the membership dues. This was the end of accreditation for a while.

As early as the late 20's the college administrators had begun making overtures to get the Junior College accredited.

Spathelf "blew his cool," and as a mitigant, the North Central Association gave him the option of reapplying in two years instead of waiting the traditional three.

Thus in the 1957-58 school year, John Johnson, who had been hired as a professor of economics, was named by the president to head the Self-Study Committee to launch a second attempt for accreditation. 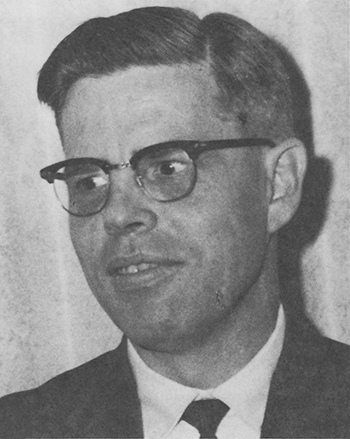 Reams of copy later, with input from a host of faculty members, the second self-study report was compiled in the school's 75th year of operation. It and other supplemental documents were duly shipped off to the offices of the North Central Association of Schools and Colleges.

There was much joy in Mudville -- mighty Spathelf had not struck out.

Spathelf was duly honored at a recognition banquet commemorating the accreditation of Ferris Institute by the North Central Association of Colleges and Secondary Schools on May 19, 1959, in the Dome Room of the Student Center, which had been dedicated just one year before.

The faculty soon organized a chapter of the American Association of University Professors. The students began petitioning and receiving acceptance in a number of professional and social fraternities and sororities.

As Ferris Institute/Ferris State College began to build up transfer programs, the school would accept associate in arts degrees from accredited two-year colleges as equal to two years at Ferris.

There was much joy in Mudville -- Mighty Spathelf had not struck out.

There is something else that resulted from the accreditation: Ferris Institute broke the barrier; no longer was accreditation limited to liberal arts colleges. Two-year colleges began seeking accreditation and winning it.