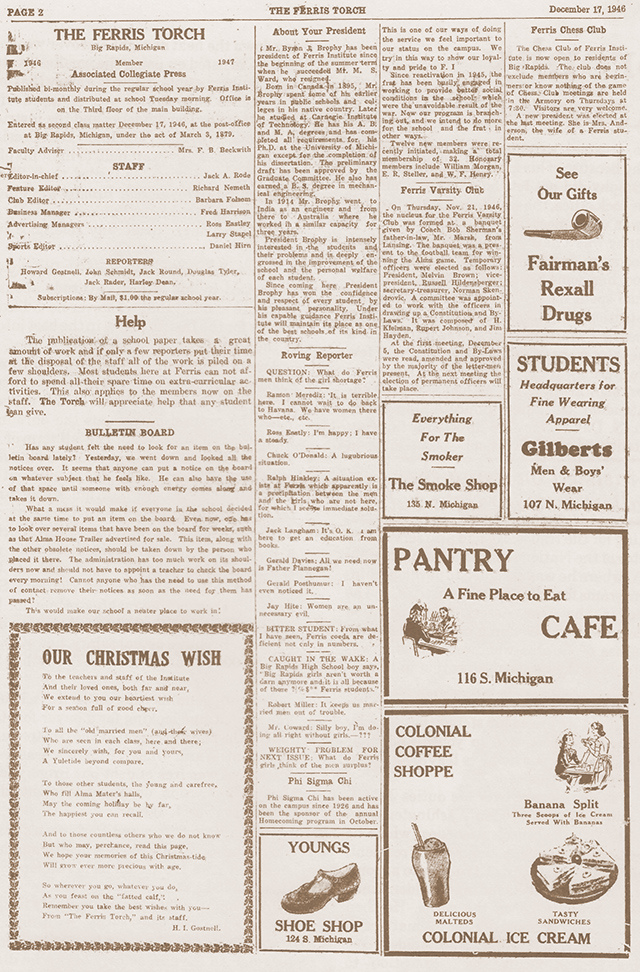 The Institute did not go from private school to state college overnight. There were many attempts to sell it before Public Act 114, which guaranteed state support, was passed in 1949.

Mr. Ferris had seemed to be able to keep the school solvent by tuition charges alone, a feat that few colleges had been able to achieve. When the Big Rapids businessmen took it over in 1931, there was a debt of about $70,000.

To reduce the debt, the trustees used up a $10,000 contingency fund, which until then had been held sacred. The trustees also borrowed the $11,000 Carlisle Student Loan Fund, which had been gathered in memory of "Tommy" by students and alumni.

Bert Travis and Lavina Masselink owned the bulk of the stock. Travis and two of his daughters, Geraldine and Irene, were on the faculty, and they received their salaries from the school, but Mrs. Masselink was not receiving any money from her stock dividends. To help her out, Frank Johnson, the Detroit automotive engineer, paid Mrs. Masselink $14,000 for her stock held by the Board of Incorporators. 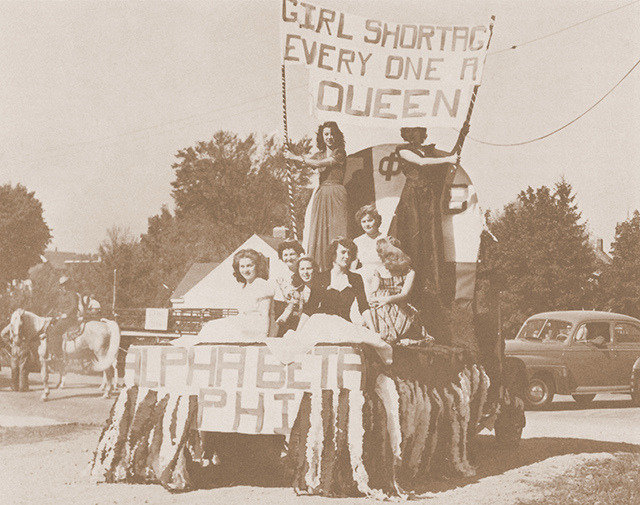 This 1946 Homecoming float by Alpha Beta Phi could have been titled "Democracy in Action," considering its motto of "Every One A Queen." Of course, the "Girl Shortag(e)" may have had something to do with that sentiment.

Ten years after the Big Rapids businessmen took over the school's control, they decided to refinance $30,000 of the school's debt by issuing that many more bonds at 3 percent interest payable as dividends. Their rationale was that since the original bonds were issued at 6 percent interest, they would save 3 percent when they made repayments.

Mr. Ferris seemed to have the ability to keep the school solvent by tuition charges alone.

In February 1943, Colin Smith, representative to the Legislature from the Mecosta-Lake district, introduced a bill calling for the state to purchase the school for $70,000 and earmark a $175,000 budget for it. Smith stated that the name was to be changed to Ferris Vocational and Trade School, thus reflecting its original title. The school was to be administered by Central Michigan College.

Years earlier Mr. Ferris had rejected an offer by the forerunner of Central Michigan College that he move his school to Mt. Pleasant, merge it with Mt. Pleasant Normal and Business Institute and administer both schools. Vocational schools for young delinquents were high in Mr. Ferris' priority list when he was governor.

On March 5, 1943, the Pioneer carried a news story headlined "Bill to Purchase Ferris Seen Doomed in Committee." Quoting a member of the Senate Ways and Means Committee, the Pioneer stated that "the State Board of Education could use Ferris if it were purchased by the state, but that the money could be used to better advantage elsewhere."

The school was to be administered by Central Michigan College.

The bill passed the House 55 to 36 on March 16, 1943, but opponents were already saying that the state would have to spend $250,000 to recondition the school's obsolete buildings, described as firetraps.

Whether the rumors were squashed is doubtful, but information was disseminated to the point that Mr. Ferris had sold the school to the Masselinks and the Travises when he went to Washington, and that his estate had no claim on it. Those favoring the move also pointed out that of the $70,000, the state would be repaying itself $11,000 from the Carlisle Fund and $10,000 from the cash delinquent fund, leaving only a payment to "others" of $49,000. Of this $49,000, $10,250 was owed to B.S. Travis and $14,000 was due to Frank Johnson. Obviously these two men were entitled to this money, and there was no theft there.

The bill passed the Senate March 26 without any debate by a vote of 26 to 6. Its fate, however, depended on Republican Gov. Harry F. Kelly, who kept everyone in suspense for almost three weeks before vetoing the bill on April 20, 1943.

"The basic weakness in Ferris Institute has been that it has been inadequately financed."

The next school year was the disastrous one for 48 students and 10 or 11 faculty members, which included President Ward. Ward augmented his income by making public speeches for a fee.