Being a lumbering town, Big Rapids was well supplied with saloons and other "dens of iniquity," and W.N. Ferris waged a continuing battle to keep his students decent -- to be their father away from home.

Typical of his battles with Big Rapids businessmen who provided services he didn't approve of was the one described in this letter: 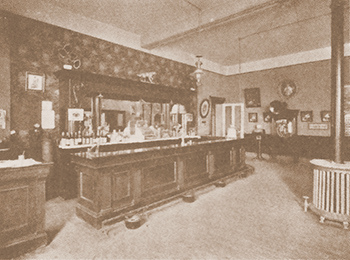 This bar in the Northern Hotel in Big Rapids was typical of those found in the saloons of the period. In the advertisements, the hotel called this facility a "buffet."

". . . If I am correctly informed you are violating the law on Sunday and other days in your sales of intoxicating drinks. If I am correctly informed you are selling to my students on Sunday or you are allowing them to have drinks on Sunday. If I am correctly informed you are also selling to students who are not 21 years of age. I have considerable evidence at my command that I think is trustworthy and if it is trustworthy permit me to say that in the event of another violation I shall see that you are prosecuted to the full extent of the law. I am aware that a person who calls for a drink on Sunday is a violator of law. You know better than to permit them to have it on that day. I am told that you have a unique device for going from the toilet room to the saloon and that this device is used on Sundays. I am very plain with you because I am inclined to show no man any mercy who seemingly violates the law. Now, if you don't wish to accept these charges I can very easily cause to be brought in a legal way the witnesses. To say that I am indignant is to put it very mildly. To say that I will not tolerate it providing I get any evidence is to put it very mildly. You ought in the name of decency join me in trying to keep my boys decent. If I have been unjust to you in this communication, please say so. But, bear in mind that I prefer to bring the whole matter into court if you feel very much injured."

"I shall see that you are prosecuted to the full extent of the law."

To keep the "boys" (girls would not think of going there) out of the saloons, W.N. Ferris held school on the Fourth of July until the advent of Prohibition, and Michigan went dry.

Big Rapids had its own prohibition, voted on every two years, long before it became a state and national issue. During those days before World War I, Mecosta County residents had to go to Sand Lake to get their liquor. These were the days of rail travel, and the trains were kept busy going from Big Rapids to Sand Lake, two counties away.