Every Reason to Give

John Fenn and his wife Lynda aren't Ferris alumni, nor are they typical Ferris donors. Their reasons for giving are many, each as powerful as the next.

John joined the advisory board for Ferris Surveying Engineering program at the urging of Ferris Professor Sayed Hashimi, and shortly thereafter Fenn and Associates Surveying Inc. began donating $1,500 a year in scholarship funds to support Ferris students in their studies. It wasn't until Lynda accompanied him to a Michigan Society of Professional Surveyors meeting that it occurred to John he might want to give more. 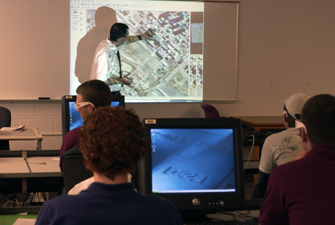 "My wife came with me to the state meeting and was talking with Dr. (Khagendra) Thapa, who mentioned that the company had been giving scholarships," says John. "Lynda asked how much, and he told her $1,500. She turned to me and said, 'Kinda cheap, aren't ya?'"

John promptly increased his yearly scholarship contribution to $2,500, and Lynda took a more active role in the cause, supporting an annual student-auction fundraiser to the tune of thousands of dollars each year. The students each work for Fenn and Associates for a day, and they rarely forget their benefactors.

"It's so much fun," says Lynda. "They always remember us when we come to campus. They recognize us and know us by name."

When that still wasn't enough for the Fenns, they approached Professor Hashimi with the idea of endowing a scholarship. He thanked them, then suggested they consider endowing a laboratory instead, donating funds to keep the facility supplied with the latest surveying equipment and technology. The idea was a perfect fit. 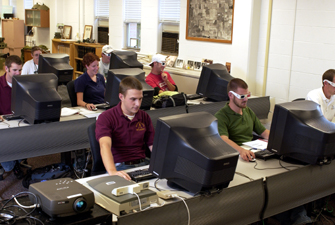 "It's a way to touch all the students in the program, because every surveying student will pass through that lab and benefit from it," John says. "Our support of students comes through a love of the profession. I don't believe there's a school in the nation that can surpass Ferris in teaching surveying."

"And we think of these students as our children," says Lynda. "Not just the ones who come to our business to work for a day, but all of the students in the Ferris program."

Any reason is a good reason to make the world better.