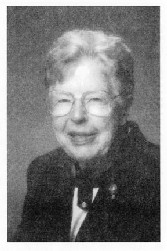 Mary C. Feindt has a distinguished history of exemplary leadership and outstanding service to the surveying engineering profession and to Ferris State University.

For more than half a century, Mrs. Feindt has been owner and president of Charlevoix Abstract & Engineering Company. She works full time operating the business, acting as Charlevoix County Surveyor, and often testifying in court as an expert witness on land survey and title examination issues.

In addition to her other duties, Mrs. Feindt acts as liaison between the American Congress on Surveying and Mapping and the American Land Title Association, and she travels nationwide and worldwide to share her expertise with various survey and title organizations.
Mrs. Feindt, who helped to organize Ferris State University's surveying department, serves on the University's Surveying Engineering Advisory Committee. In that capacity, she contributes to FSU's educational programs for surveyors and engineers, providing insight on how classroom teaching can reflect the real-world environment of working professionals. In 1993, Mrs. Feindt received an award from the University's College of Technology for outstanding service to the profession of surveying engineering.

Her long list of awards and honors continues to grow, the most recent was added this past October when she was given the American Society of Civil Engineers 1998 Surveying & Mapping Award. The Mary C. Feindt Award was named for her on July 17, 1987, to be given on special occasions at the annual meeting for dedicated service to the Michigan Land Title Association. Mrs. Feindt has been recognized innumerable times for her professional and community achievements.

In recognition of her outstanding leadership and contributions to Ferris State University, the Board of Trustees of Ferris State University offers its sincere gratitude and takes great pride in conferring upon Mary C. Feindt the honorary degree of Doctor of Business and Industry, with all the rights and privileges thereunto appertaining