The time is 6:51 according to a large, gold-bezeled Rolex clock. The spectators who are already milling around the first tee of The Broadmoor's East Course make way for an early-morning gaggle of goslings heading toward the water that guards the third green. Inside the ropes, a technician plants a wooly-looking microphone near the tee markers to capture the sound of driver striking ball. There is a basket of fruit and a cooler of bottled water for the players and caddies. 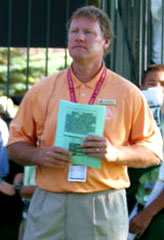 Only a few scattered clouds dot the blue Colorado sky as the sun begins to beat down on a day that weather forecasters predict will reach a high of 97 degrees. People begin taking seats in the grandstands, which are full by the time Tom Carey, the first golfer to tee off in the second round of the 2008 U.S. Senior Open, launches his ball toward looming Cheyenne Mountain.

Although temperatures will be near record highs, there is no rain in the forecast. The white canvas concession stands that will soon be doing a brisk business in hot dogs and Coors beer now lend a certain bucolic feel to the scene. Fan favorite Fred Funk is in the lead at 5-under par, and Greg Norman, who just two weeks earlier finished tied for third at the British Open, is also near the top of the leader board . . . For Russ Miller (B'87), director of golf at The Broadmoor, all is right with the world.

Connected to his staff by walk-talkie and cell phone, Miller is in The Broadmoor's International Center, where more than 500 members of the media conduct interviews with players, post stories via the Internet and keep track of scoring on a large projection screen when they're not out on the course. "It'll be nice to get some normal sleep, but at the same time it's such an adrenaline rush," says Miller. "We have 3,000 volunteers from all 50 states and expect 150,000 spectators for the week. We had a little charity event Monday night in our Carriage Museum and in the Broadmoor Hall — Vince Gill and Amy Grant were here to do a concert, and we hosted a dinner. We raised about half-a-million dollars for our troops."

Characterizing anything associated with an undertaking as large as mounting a major PGA stop as "little" is the very definition of understatement — especially considering The Broadmoor's unique role. Typically, the United States Golf Association takes on the responsibility of organizing all the logistics for a major tournament while sharing revenue with the host club. The Broadmoor did it differently. "We paid the USGA a fee and then took on the management ourselves," says Miller, whose wife, Linda (B'86), was in charge of all corporate merchandise and other retail responsibilities for the championship.

"With 18 restaurants, 24 retail stores and hundreds of employees, we have the capability. It was a financial risk, but we had the ability with our people who are here every day and thought it would be a good opportunity."

Miller points out that it's still the USGA's championship. He and the Broadmoor worked closely with them to tailor the course for the tournament, take care of the players and accommodate the TV coverage, "but as far as operations, hospitality, retails and admissions, we took that on ourselves."

A Canvas of Grass

To walk around The Broadmoor's grounds is to get a feeling for the history of a classic resort. The Italian Renaissance-style main hotel retains the elegance it had when entrepreneur and mining magnate Spencer Penrose opened it on June 29, 1918. "If you look at pictures of the original hotel, it's identical. We've tried real hard to keep that traditional feel," says Miller.

"What we've done on the East Course is to take it back to the way it was originally in 1918," explains Miller. "Over time — because of irrigation, maintenance, or somebody who just didn't like where a bunker was — things got changed. To me, Donald Ross was a great artist. You wouldn't take a Picasso painting and change it. On the course you see these subtle mounds out in the middle of nowhere. He did that because he was pushing dirt with a mule and a plow, and he couldn't load it up in a truck and take it somewhere. So after he'd dug a bunker, he might take dirt just 30 yards and create a mound. That is cool stuff to me."

After the tournament, Miller will next find himself involved in restoring the Broadmoor's West Course, at the same time he'll continue preparations already underway for hosting the 2011 U.S. Women's Open — a tournament held at the resort in 1995 when Annika Sorenstam won her first major victory. "We also start a big construction project the day after the tournament's over," says Miller. "We're building 48 new cottages down the right side of the 18th fairway looking due west into the mountains, and we're recreating a stream that used to be there in the old days." Despite all of that, Miller was looking toward the completion of the current tournament with decidedly mixed feelings — worried about feeling let down. "It's like Christmas — you wait for it and wait for it, and then you open the last present and it's over — then you can't wait for the next time."

A Good Walk Witnessed by Millions

By Sunday afternoon when eventual winner Eduardo Romero and second-place finisher Fred Funk strode down the 18th fairway thronged with fans, and with many more watching on NBC, it was evident that Miller and The Broadmoor had successfully planned for all eventualities.

A black bear garnered some of the most intense news coverage of the entire tournament when it wandered onto the course, briefly stopping play before lumbering back to the mountains. The cameras also captured video of deer and a fox out on the links.

And during the second round, the carillon on Will Rogers Shrine to the Sun halfway up Cheyenne Mountain (the resting place of Spencer Penrose) chimed in the middle of Hale Irwin's backswing on the first tee, causing him to hit his drive all of about 30 feet. However, Irwin nonetheless salvaged par and birdied the next two holes, which seems emblematic of the week's few glitches."It turned out even better than we had expected, which just goes back to the five years of preparation," says Miller. "It was a career highlight of my 26 years in the business. I owe a lot of my success to Ferris and the PGM and Marketing programs. If it weren't for all that, I know I wouldn't be here."

In conjunction with the tournament, the historic Penrose House hosted a photography exhibit entitled "Classic Shots," which featured 150 images of the sport's greats from "Old" Tom Morris at St. Andrews (four time 19th century British Open champion and the man who standardized the 18-hole format of the modern golf course), to Tiger Woods' injury-plagued triumph at the 2008 U.S. Open. Perhaps it won't make the cut in a subsequent exhibition, but a photo of Miller on the first tee with the threesome of Hale Irwin, Bernhard Langer and Tom Watson speaks to the hard work that is required to make such memorable images possible.

Mark Twain once famously quipped that "golf is a good walk spoiled." Some people might think so, but none of them were at the 2008 U.S. Senior Open, which is the present Miller was most hoping for.