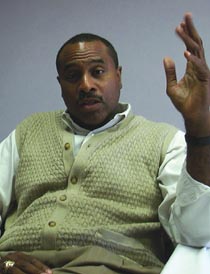 A rising star in major college coaching, Gary Waters (EHS ’78) got his start at Ferris State after a successful playing career. He was a National Association of Intercollegiate Athletics All-District selection as a player and in two years led the team to a 47-10 record under Coach Jim Wink. As a senior, he averaged 12.4 points and 5.7 rebounds per game for the 1973-74 Great Lakes Conference champions while earning all-conference honors.

Waters served as an assistant coach for 14 seasons at Ferris State. He then joined Eastern Michigan University as an assistant and later associate head coach from 1989-96. Hired in 1996 by Kent State, he led the Golden Flashes to three post-season berths and was twice named Mid-American Conference Coach of the Year. Kent State reached its first National College Athletic Association tournament in 1999, advanced to the National Invitational Tournament’s Elite Eight in 2000 and upset Indiana in the first round of the 2001 NCAA “Big Dance.” Waters took the top coaching job at Rutgers University in April 2001. That year his Scarlet Knights went 18-12, beat a school-record four Top 25 foes and made the NIT tournament. The United States Basketball Writer’s Association honored him as the District II Coach of the Year.

Waters returned to Big Rapids for his Hall of Fame induction. He sat down for a conversation about Ferris State, playing, coaching and how basketball has changed.