What Shall Our Boys Do For A Living? 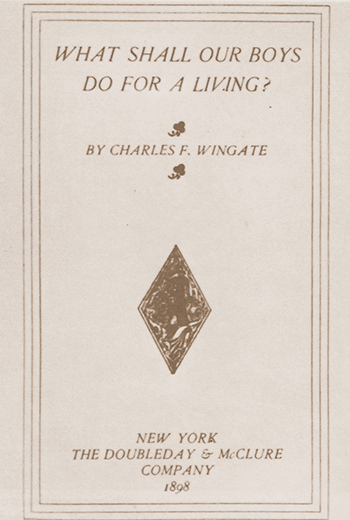 Among the books in Mr. Ferris' collection was one entitled, What Shall Our Boys Do For A Living?, published in 1898 by the Doubleday & McClure Company of New York. Its author is Charles F. Wingate, but the book could well have been written by W.N. Ferris because its philosophy so closely aligns with Ferris'. One paragraph in the book marked for emphasis, apparently by Mr. Ferris, reads:

"Of the public school pupils, Prof. W.T. Harris says: 'One percent enter college, three percent the high school and academies, and 96 percent don't get beyond the elementary grade.' It is important, therefore, that the course of studies should be adjusted to the needs of the latter. Only 8 percent of the population enters business or the professions, while 92 percent labor with their hands. As the former have schools of law, medicine, dentistry, engineering, architecture, etc., the hand workers should have facilities for manual training provided for them."

"Only eight percent of the population enters business or professions, while 92 percent labor with their hands."

One of Ferris' dreams was to develop a manual training department. Oswego Normal had tried it, but did not continue it. Ferris found that by the end of the nineteenth century, people did not think manual training belonged in higher education. In nearby Muskegon a benefactor had begun a manual training high school for the area.

Wingate's book, which drops the names of lots of men who had been prominent in business and industry up to that time, contains chapters on all sorts of aspects of training for the job market including aptitude, health, moral training, recreation, reading materials, agreeable manners and education.

"As the former have pre-professional schools, the hand workers should have facilities for manual training provided for them."

It also has chapters giving an overview of the professions including journalism, law, public speaking, medicine, engineering and business.

The book indicates that even in those days people did not follow directions and gives glaring examples of shabby correspondence and applications for jobs which were advertised.