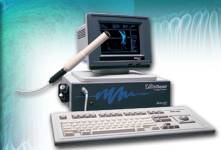 The B-Scan ultrasound is a diagnostic procedure used for the detection and differentiation of ocular disorders.

The B-scan technique consists of focused, short-wavelengths and an echographic probe that converts electrical energy into mechanical energy. The energy is emitted as an advancing acoustic wavefront into the eye, varying its velocity as it passes through various ocular tissues. These tissues will reflect, refract or scatter sound waves, in turn creating recordable echoes that are represented as dots. These dots coalesce and represent two-dimensional images from the posterior to anterior fundus.