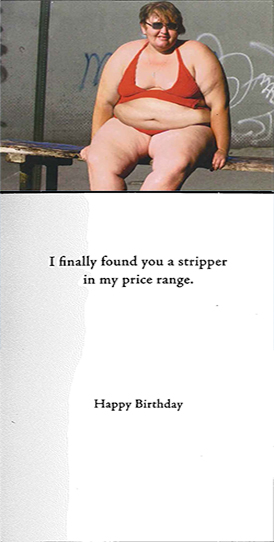 It was a Saturday morning. I had a birthday party that evening and needed to go to the store. I needed to purchase a gift and a card for two people. I was looking at Recycled Paper Greetings because I appreciate the company's attempt to be environmentally conscious. Then I found something that I did not appreciate. I came across a card with a woman on the front. She was sitting on a bench on what was probably a warm sunny day, wearing a red bikini. I am used to seeing pictures of scantily clad woman all over, but usually they have unrealistically perfect bodies. This woman did not. She was obviously obese. I knew that this picture was not intended to serve the same purpose as the ones I am more used to seeing. I had an idea of what the purpose actually was before I looked inside the card to have my suspicion confirmed. The message inside was, "I finally found you a stripper in my price range. Happy Birthday." The woman who was photographed was the victim of a mean and cruel joke.

Women are constantly reduced to sexual objects on television, in movies, in magazines, on bumper stickers, and on greeting cards. The message that a woman receives from these images, even if on an unconscious level, is that her worth as a human being is tied to her physical appearance. Her value is in her sex appeal. The vast majority of women do not fit the unrealistic standards that these images portray. The majority of magazines targeted toward women advertise all the new exercise and diet trends as well as the latest anti-aging craze. That message has particularly damaging effects on the self-esteem of many women. Such messages are extremely prevalent in American society and even a woman who is intelligent and accomplished will find it difficult to not be affected by such a constant influx of images reminding her that she is not sexy enough. That is cruel enough.

This greeting card is meant to be amusing because the woman photographed is so very far from the idealized female form. The implication is that this is not something that a man wants to see. It is cruel because it is making light of something that creates a deep wound within the female psyche. So there is pressure to conform to the ideal body type and there is ridicule when a woman fails to conform to such an ideal. A woman does not have to be obese to feel the hurt of such a jest. This greeting card is not only insulting to women who are overweight. It is insulting to all women.