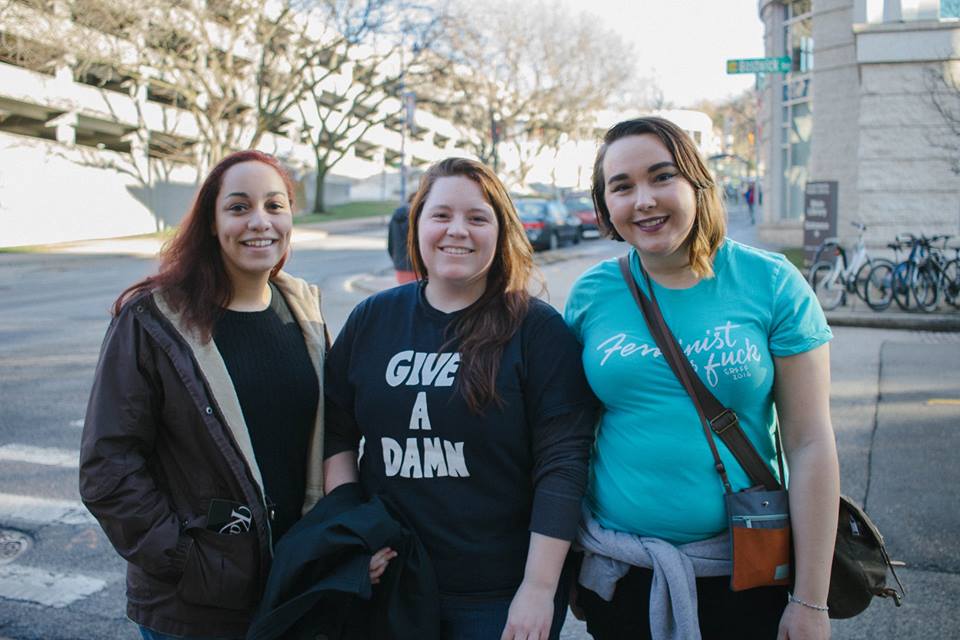 I was a little nervous to attend it, but my friends got me to go with them to the Women’s March in Grand Rapids, Michigan, the day after Trump had his inauguration. I was raised to stay away from large crowds, as there is a possibility that some people could get a mob mentality, but my parents also raised me to stand up for my rights. And oddly, I feel as though Trump has helped me become a protestor and activist.

I come from a liberal biracial family and we’re concerned about Trump’s presidency. Appointing Mike Pence as the Vice President when he has set up laws discriminating against the LGBTQ community concerns us. Appointing anyone who says that science is a lie, climate change is fake, civil rights are set up by racists, and appointing other people to cabinets that don’t believe in research, science, or human rights—that concerns us. So, I decided to go with my friends to Grand Rapids.

When we arrived, the marchers were about 60 people strong. I was a little underwhelmed, but for my first protest, I thought it was a safe size. It was nice to be able to openly communicate with others about politics and what concerns me most about the new administration. I wasn’t cut off or chastised for not believing that he will "Make America Great Again." Marchers listened to each other’s fears, listened to what other’s biggest concerns are about the new president, and we chanted things like "Love Trumps Hate" through downtown Grand Rapids.

As we marched around a corner, we saw a large group walking with protesting signs. At first, I wondered if they were pro-Trump protestors, protesting against us. If that had been the case, I would have left. Then I noticed there was a rainbow flag. It was amazing how my stomach went from dread to happiness especially since the group had to be a couple thousand strong. Oddly enough, I think I was one of the first who started clapping and cheering out to them. They stopped and waited up for us and as a large group, we walked back to City Hall, under The Calder sculpture, and it was an awesome sight. Black Lives Matter movement was present, Planned Parenthood was present, LGBTQ, those in favor of the ACA, and every type of humanitarian-every type of feminist.

I was really impressed with who came to the march besides the advocates of well-known groups. There were many mothers who brought their sons with them. There were so many men for a "women’s movement" present that I forgot it was even called a Women’s March. The weather could not have been better. It was only January 21st, but it was warm. The Fountain Street Church offered refreshments and hosted the protest. They had vendors inside that were selling T-shirts, pins, and other protest gear. I wanted to get a "pussy hat," but they were all out.

At the end of the day, there was only one run in during the march with a Trump supporter. We were crossing an intersection and an older man and his wife were in a minivan honking at us. Whenever anyone honked we would cheer as they usually were supporting our march, but when we looked over at this man, he was waving his Trump hat as us. He didn’t make any crude gesture that I saw. It almost seemed as though he thought it was all in good fun. All until he turned the corner to drive past us and his wife flipped us the bird as he drove past. She sank down in her seat when she did it so we would have a harder time seeing her face. I thought I would get mad, but I couldn’t. I felt bad that she didn’t understand my point of view; that she doesn’t even want to try. Ironically, I feel like she should have been marching out there with us instead of assuming we were all one entity. It’s ironic I write that, cause at the end of the day, we are all on the same team whether we want to be or not.