Throughout history women have been referred to animals if they do not fit the norm of an “appropriate” woman, or in other derogatory forms. Though many would assume that we no longer do that our everyday vocabulary and slang perpetuates this idea. For example a strong woman is called a “bitch” otherwise known as a female dog. When girls get into fights we call them “catfights” and they fight with their “claws” or nails. An older woman looking for a younger man is predator and called a “cougar”. Not all animal references are with negative intentions though. The British slang for an attractive young woman is “bird” or “pigeon”.

There are several themes in Greek mythology in which a woman is portrayed as a beast, an animal, or a killer of men. First of all is Medusa. Medusa was once considered very beautiful. Some myths state that Athena was jealous of her beauty, for Medusa was a priestess for the temple of Athena. Other myths state that she had made a pledge of celibacy and later fall in love with Poseidon, God of the seas, and broke her vow. Athena then transformed Medusa into the well-known beast of today. Medusa’s hair is made of serpents, her skin of scales, and her gaze could turn any man to stone.

Other mythological women beasts include: Harpies, Sirens, and Mermaids. 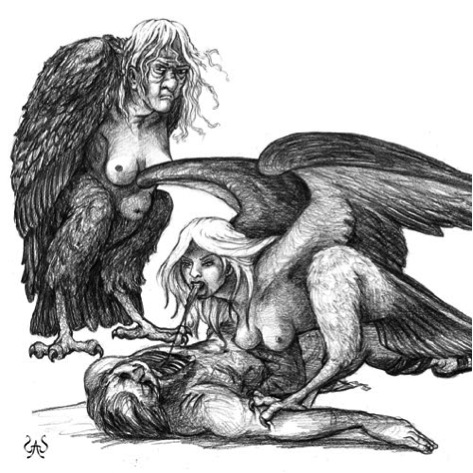 Harpies: Originally harpies were thought as beautiful maidens with golden wings, but their appearance was then changed to ugly creatures with wings, birds with the heads of maidens. Their purpose is that of thieves. They steal food and people for the gods. Whenever there was a disappearance of a person or valuable item, Harpies was considered the culprit.

Sirens: Siren’s in mythology were beautiful half-woman, half animal like creatures who sang songs so beautiful the listener would fall into a state of lethargy. They would forget what they were doing and typically died of hunger. In many tales sirens are sisters who lured sailors to their death. Sirens have also been identified as mermaids in similar stories.

Women are also equated to animals as “Just another piece of meat” 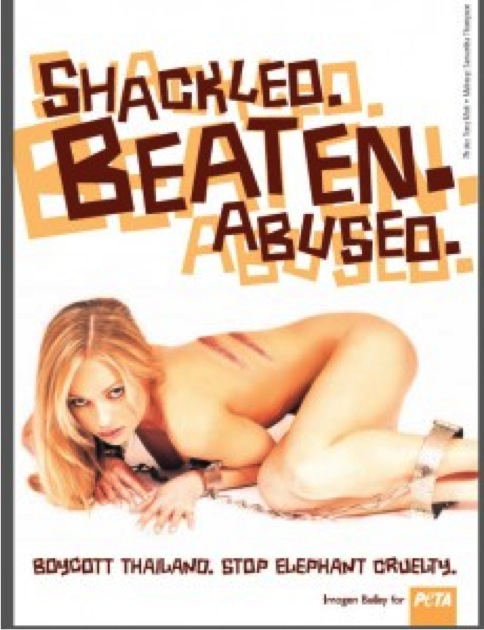 Peta’s recent aids against animal violence use women as an example of animals in some barbaric ways: These aids are meant to grab the reader’s attention and also be satirical, yet the question remains “Why do we use women, and why are they so sexualized in these particular advertisements?”. The simplest explanation is this: attractive women can sometimes be considered “a piece of meat,” just as animals can also be considered “just a piece of meat”. This vague explanation therefore condones sexually objectifying women and the use of violence towards women as a marketing strategy.

Illinois.edu (NA). Medusa in myth and literary history. University of Illinois Retrieved on 9/18/14 from

Wikipedia (2013) Siren (mythology). Wikipedia The Free Encyclopedia, Retrieved on 9/18/14 from