As the Faculty Lead of the Ferris Museum of Sexist Objects, my colleagues and I have created a case that examines the theme of women and power. Some of these objects are vile and virulent, while others use seemingly innocuous humor. All of them indicate that outspoken and ambitious women are dangerous. A common message is that women who aspire to powerful positions want to be men, as this Spy magazine cover illustrates:

Objects like this make clear that these are women who have turned their backs on their true nature and calling. They are no longer real women. Once they step out of their homes and enter the public sphere they expose themselves either to actual violence, as in the case of the Suffrage Movement, when women who marched in the streets were run down by horses or beaten with sticks, or to implied violence, such as bumper stickers, signs, and buttons that show Hillary being peed upon, thrown in prison, or deprived of life itself:

There is a long history here. In nineteenth-century post cards, such as “The Club Woman” (below), a caricatured woman is portrayed with masculine features. She is called “a joke” and her lot a “godless crew.” They are told to “go home and tend your babies” because “that’s what real women do.”

Some of the better-known suffrage post cards, such as those below, focus on the harm that suffragists cause their families when they are out advocating for themselves:

The message is that a real woman knows that her most important work is in the home, taking care of her husband and children.

The Hillary “nutcracker” from the 2008 Democratic primary indicates that a woman who runs for office is a threat to masculinity itself:

The objects below target Hillary’s marriage and deem her sexually inadequate. Bill wouldn’t cheat if she was a good wife:

The term “bitch” has been used to demean women for over 500 years and has achieved new life in the 2016 election. A bitch is a “nasty woman” who doesn’t know her place and needs to be silenced. In all three presidential debates, Donald Trump regularly interrupted and talked over Clinton. Ubiquitous buttons, signs, and bumper stickers demand that he “Trump that Bitch.” Just as a dog needs to be taught to heel, this is clearly a woman who needs to be put into her place. “Life’s a bitch, don’t vote for one,” indicates that assertive women are of no use to anyone:

Apart from the animal reference connoted by “bitch,” another popular object at Trump rallies equates Hillary Clinton to a dismembered chicken. Not only has she been cooked up and offered for consumption, she is also body shamed for having “fat thighs” and “small breasts”:

Despite the narrative of progress that many Americans like to embrace, the popularity of anti-Hillary merchandise reveals that sections of the electorate remain hostile towards women who seek political power. That only 20% of our nationally elected representatives are female indicates that when it comes to deciding who should be in charge, a significant percentage of the electorate prefers to have men at the helm. Not only that, many, including my own mother, appear to relish in the “alpha male” energy that Donald Trump brings to political discourse.

Is the problem larger than Hillary herself? Is it possible that all women who disagree with Trump’s message are “nasty women?” White women may join their sisters in voting majority Democratic this year. With the exception of 1996, they haven’t done this in 44 years. With such results in the offing, can women be trusted with the right to vote? The “Repeal the 19th Amendment” movement, as innocuous as seems at first, has a dark underside. If women can no longer vote, then Clinton cannot win. A quick examination of the merchandise below reveals that we haven’t seen this level of hostility towards women’s suffrage for almost 100 years:

These objects may not seem significant in our “era of equality,” but if we go further back in history, we find that one of the most influential Greek philosophers, Aristotle, had this to say about women: “we should regard the female nature as afflicted with a certain defectiveness.” The “hysteria” referenced in the T-shirt above indicate the 19th century pseudo-scientific contention that women are emotional and out of control because of their uteruses. Similar 19th century “science” equated women’s frames to those of ostriches and their brain size to that of children. Freud, highly influential for most of the 20th century, advocated the widely accepted idea that all women had the subconscious desire for penises.

What’s a woman to do? Shows of solidarity, especially since the third debate, are becoming more visible. “Nasty woman” has become a rallying cry for 21st century women who have realized that hard won rights can be taken away. 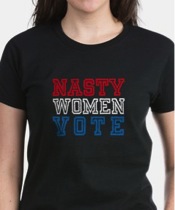 We live deep in Trump country where few Clinton supporters are brave enough to put out their signs. A colleague had her Hillary sign yanked out of the ground and hung in a tree by a coat hanger. The stakes are high this election and violence is in the air. The Suffrage Movement, previously faraway and quaint phenomenon, has gained a new and unexpected relevance. When you vote on November 8, do it with and for the “nasty women” and for all of our young daughters who wish they were old enough to take a stand. 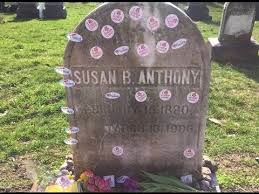 Back to Activism page