Please enjoy this walking tour of historical and named buildings on campus. Visit the campus map for locations and directions.

This building was opened in October 1929 and is the only building to have survived the campus fire of 1950. It was built as a multipurpose building next to Old Main. The decision was made to name the building after the thousands of alumni who contributed funds for its construction.

The first health center was built in 1957, replacing an earlier Ferris Institute hospital which had burned. Dr. Frederick Birkam served as staff physician from 1969-1976. In 1976, he became Chief of Medical Services. The building was renamed in his memory in 1988.

Bishop Hall was originally built as a residence, but has also housed the President’s offices and the College of Education and Human Services. Ora Bishop taught chemistry at Ferris from 1907-1920. He moved to Florida and remained a teacher until age 89. 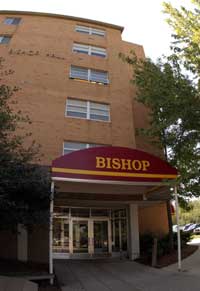 Glenn Bond was a Board member from 1961-1965. Bond was an officer at the Upjohn Company and had worked on biological programs for the Navy during World War II and taught biology and other science courses.

Byron Brophy served as president from 1946-1952. He implemented the transfer of the school from private institution to a public one. During his tenure, two-thirds of the campus was destroyed in a fire and enrollments increased because of veterans programs.

Cramer Hall was the first of the “skyscraper” dormitories. It was named for William Cramer who taught botany and biology at Ferris. Cramer was known to spend hours searching the woods for specimens and maintained a greenhouse in the Old Main building. 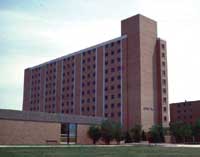 Robert Ewigleben served as president from 1971-1984. The complex was built during his tenure, and renamed for him in 1986. Ewigleben oversaw the creation of over 40 new programs including professional golf management and optometry.

Granger Center for Construction and HVACR (2004)

This facility is the newest building on the Big Rapids Campus. It replaced the Construction Technology Center. Alton and Janice Granger own the Granger Construction Company (founded in 1954) and wished to support the future of the construction industry. Several family members and company employees have graduated from the construction program.

Hallisy Hall is one of several residence halls constructed in the late 1950s. This hall was named after Richard Hallisy, who was the Dean of the School of Commerce between 1954-1957. The 1957 Ferriscope yearbook was dedicated to his memory.

William D. Henderson (‘92) was a student and friend of founder Woodbridge N. Ferris. After teaching at Ferris from 1892-1902, Henderson went on to teach physics at the University of Michigan and direct their extension division.

Johnson Hall has offices and classrooms used by both Arts, Sciences and Education and Technology. Frank Johnson (’92) both attended and taught at Ferris Institute in the 1890s. Later Johnson became an automotive engineer for Cadillac Motor Company and Ford Motor Company. He designed both the V-8 and Lincoln engines. During the Depression, he supported the school financially.

Housing the General Counsel’s office, this property was purchased by Ferris in 1989 from the Miles family. Gerald McKessy (’29) donated the money used to purchase the property. He was a respected lawyer with private practices in both Kalamazoo, and Detroit, Michigan. 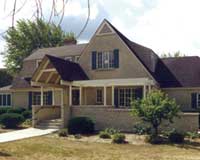 This hall was named after Mary J. McNerney, faculty member for both German and Latin. McNerney also coached women’s basketball and served as the first Dean of Women.

This residence hall was named for Karl D. Merrill (’04) who both attended and taught at Ferris in commercial subjects. Merrill also was Dean of Commerce, Dean of Men and vice-president (1937-1941) and acting president (1952).

Pickell Hall was another residence built during the expansionist period of the 1960s. Dr. Charles Pickell (’05) was an early Pharmacy graduate who later was a faculty member and Dean of the program. He left Ferris in 1911 to practice dentistry.

The Prakken Building was originally named the East Building and renamed for Lawrence Prakken in 1976. Lawrence Prakken of Ann Arbor, Michigan served on the Ferris Board from 1950-1977. He was an educational publisher and a newspaperman. He was involved in the formation of the Michigan College of Optometry.

Victor Spathelf served as Ferris president from 1952-1970. During his tenure, the student body grew from 700 to 9000 and the faculty increased from 70 to 550. Ferris became Ferris State College and was accredited for the first time by the North Central Association.

Raymond Starr (’07) was instrumental in getting the state to accept the school as a state institution. Starr became the first chair of the Board of Trustees in 1950. Starr also served as Michigan’s attorney general, an associate Michigan Supreme Court judge and a federal district judge. 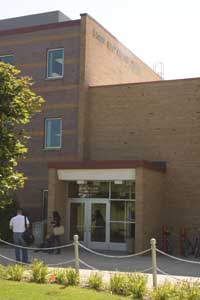 This building has long housed College of Technology classrooms and labs. It was named after Dean Fred Swan, who oversaw the creation of the School of Technical and Applied Arts in the early 1960s. He died suddenly while the building was being constructed.

The Timme Center for Student Services reopened in October 2002 after extensive renovation. It previously served as the campus library. Abigail Smith Timme (’11) attended Ferris Institute’s shorthand program. She worked with her husband Ernst Timme on development projects. In 1976, she received an honorary doctorate from Ferris State College. 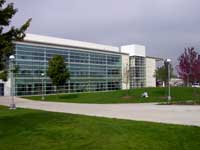 William Clinton “Top” Taggart (’11) played football for Ferris as an end and halfback. He went on to coach the team in 1912. Taggart formed the Petroleum Oil Company and remained a strong financial supporter. Ferris granted him an honorary doctorate in 1964 and a distinguished alumni award in 1968.

Bert Scott Travis (’92) was another early graduate who returned to teach at the school. Among his subjects were civics, mathematics and spelling. He also worked in the business office. He co-owned part of the school between 1921-1931.

Vandercook Hall is named after Colonel Roy C. Vandercook who was the original vice-chair of the Board of Trustees after Ferris became a state school in 1950. Vandercook was a friend of Governor Woodbridge Ferris. He also was instrumental in the formation of the Michigan state police and served as the first police commissioner.

Mary Rood Ward was the Dean of Women from 1943-1951. She had worked her way up through the administration after starting as the business office assistant in 1931. In 1931, Ward was appointed as a faculty member. 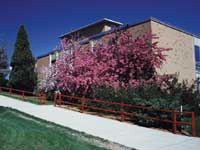 Originally named Starr Auditorium, this facility was renamed in 1986 after Michigan Governor G. Mennen Williams. Williams was the governor who accepted Ferris as a state school in 1950. He later served on the Michigan Supreme Court.

Special thanks to Karen Noreen who helped compile data, and Daniel Williams for the design of the "THE HISTORY OF FERRIS STATE UNIVERSITY’S NAMED BUILDINGS" brochure, from which this site was adapted.