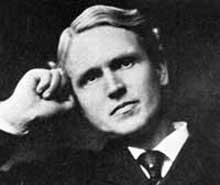 Woodbridge Nathan Ferris was born January 6, 1853 in a log cabin near Spencer, Tioga County, New York, the son of John Ferris, Jr. and Stella Reed Ferris. As a child, Woodbridge attended a rural public school, which he claimed, was the horror of his life.

When he was 14 years old, Ferris entered the academy at Spencer, N.Y., where he spent 9 months.

Oswego Normal during its formative years was pushing the Pestalozzian theory of learning by doing rather than through theory, and W.N. Ferris was considerably influenced by it. At Oswego, Ferris met Helen Gillespie, who later became his wife.

In early 1874 Ferris became the principal of Spencer Free Academy. He married Helen (Nellie) Gillespie who also served as a teacher at Spencer. At the end of the second year at Spencer Mr. Ferris decided not to continue in public school work but rather to follow his dream of founding a private school.

That dream led Mr. Ferris through several ventures involving private education. In 1879, Mr. Ferris once again entered public education as superintendent of schools in Pittsfield, Ill. He held this position for 5 years, leaving it vowing never again to be involved in public education. In May of 1884, he moved his family to Big Rapids, Mich. with the intention of opening a private school. The Big Rapids Industrial School, forerunner of Ferris State University, opened on September 1, 1884.

In addition to his role as an educator, Mr. Ferris ran for and was successfully elected to the office of Governor of the State of Michigan in 1912. His overwhelming popularity also got him elected to the office of U.S. Senator in 1922. Woodbridge Ferris passed away on March 23, 1928, 11 years to the day of Helen Ferris' death. A thousand Ferris students and townspeople gathered at the train station standing in the drizzling rain in silent tribute as the funeral train pulled in. All businesses and schools, including the Institute, were closed the day of the funeral. Many state elected officials attended the funeral, including Governor Fred W. Green. Six military companies and the 126th infantry band marched in the funeral cortege to Highland View Cemetery in Big Rapids, where Mr. and Mrs. Ferris are both interred. 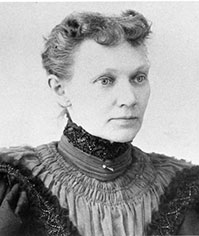 Wanting a better education for her and her siblings, Helen's father moved them to Fulton, NY where Helen and her sister Alice attended Mrs. Caldwell's private school for girls and the Falley Seminary. In 1870, she entered Oswego Normal and Training school in Oswego, NY. It was here that she met Woodbridge N. Ferris.

After leaving public school service, the couple was involved in several private school enterprises, and had their first son, Carlton, on September 18, 1876 in Dixon, IL. A second son, Clifford, was born in June of 1881 in Pittsfield, IL, but died a short time later.

In May of 1884, Helen along with her son Carlton moved to Big Rapids, MI to assist in the founding of the Big Rapids Industrial School. Helen taught in the school alongside her husband. Her expertise and degree were cited in promotional materials. She was recognized by the state's superintendent of public instruction as the best geometry teacher in Michigan.

On April 16, 1889, Helen and Woodbridge's third son Phelps was born in Big Rapids.

Helen continued teaching at the Institute until 1901 when her deteriorating health forced her retirement. Although no longer teaching, Mrs. Ferris held receptions, readings and counseling sessions for students. She also frequently accompanied her husband to Lansing while he served as Governor.