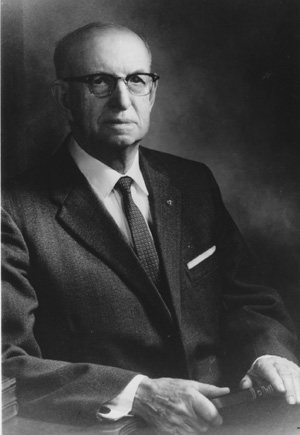 Karl Merrill had a long history of service to the Ferris Institute. In 1939 the trustees chose him as one of the administrators of the school's affairs, naming him chairman of the Institute. When Byron Brophy was due to take over his duties as president on July 1, 1946, he was delayed in Washington until July 10. Brophy asked the Board of Trustees to appoint then dean Karl Merrill as Acting President until he could actually be on the scene. Brophy then proceeded to give Merrill a list of matters to attend to before he came to Big Rapids.

When the trauma of the Old Main fire (along with some personal problems) had aggravated President Brophy's Parkinson's disease, it became more difficult for him to administer the school. At the beginning of 1952, Brophy resigned and Karl Merrill was once again named acting president.