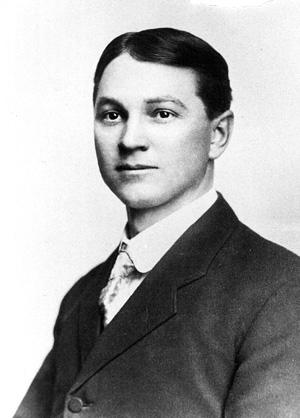 In 1896 W. N. Ferris hired Gerrit Masselink and H.H. Barrows. Masselink was hired as the second in command and to teach mathematics. Mr Ferris offered Masselink the job on the condition that his summer session was satisfactory. Then he said he would give Masselink $70 a month or $840 for the full, or if there is no school on a holiday, he loses that time." He also advised Masselink that he would locate a rental house for him. "Cottages range from five to 10 dollars per month according to location," he wrote.

Masselink was a success. He and Ferris complemented each other. Ferris didn't like athletics, but when Masselink saw an impromptu football game in progress he would jump in and coach it. Alumni report that when Ferris expelled a student for some infraction of a rule, Masselink would realize that was lost tuition and "sneak the student back in through the back door so to speak." During World War I Masselink was county chairman of the Red Cross, and Mr. Ferris was county chairman of the War Board.

Before he went to Washington in 1923 to take his seat in the Senate, Mr. Ferris sold his school. Most of the stock went in equal amounts to then vice president Gerrit Masselink and business manager Bert Travis. Travis along with Masselink and Ferris, was one of the three people who guided the school through its early years.

Even though the Masselink and Travis investments amounted to $35,000, making them the principal stockholders, W.N. Ferris continued to act like the president of the school and to hold the title. Masselink kept Ferris apprised of everything that was happening through a series of progress reports. By 1925 the progress reports had become a weekly activity for Masselink.

Masselink, like Ferris, had been born in a log cabin. His birthdate was July 3, 1872, near what is now Oakland, Mich. Mr. Ferris had intimated to him when he hired him that if Mrs. Ferris should retire that he, Masselink, would help guide the school. Mr. Ferris kept telling Masselink that he couldn't pay him as much as he was worth, but in the end Masselink would be rewarded. Unfortunately the reward was short lived. Masselink died just 13 months after Mr. Ferris' death.

Masselink loved athletics. He had been a high school wrestler of some talent -- a heavyweight champion -- and when he saw a football game or a baseball game he would get right in the middle of it, good clothes and all, and serve as coach. He often used his own money to provide equipment or material for an FI team.

Masselink, who had just taken a turn for the better, got up and went around town in the pouring rain seeking assurance from the businessmen that their pledge would be honored. He later caught pneumonia, from which he never recovered. He died April 25, 1929.