Ferris Investigators conducting collaborative research--that is, research involving Ferris State University and one or more organization, institution or agency other than Ferris — should contact the IRB office when collaborative research  is being planned. At times, FSU may rely on the IRB of another institution or organization; alternatively, the external site IRB may agree to rely upon the Ferris IRB. Ferris State University will determine reliance on a case-by-case basis where a site reliance agreement is not already in place with the organization.

If the external site does not have an IRB, a letter of permission may be required. Review our IRB Guidance on Obtaining Letters of Permission and/or watch our IRB Zoom - Obtaining Site Permission

Ferris has a reliance agreement in place with Sparrow Health System IRB in which Sparrow IRB relies upon the review and determination of Ferris IRB. For projects involving Sparrow Health, a full application should be submitted to the Ferris IRB via Cayuse IRB; Sparrow Health Institutional processes and procedures still need to be followed.

Ferris has reliance agreements in place with the following sites in which the Ferris State University IRB relies upon their IRB review:

For projects involving one of the above sites, the IRB process and procedures at that site should be followed. A brief application to the Ferris IRB via Cayuse IRB should also be submitted and include:

Ferris IRB will then issue a formal letter indicating the reliance is effective for the project.
See screenshot from the Cayuse IRB application below for guidance on how to complete this section. 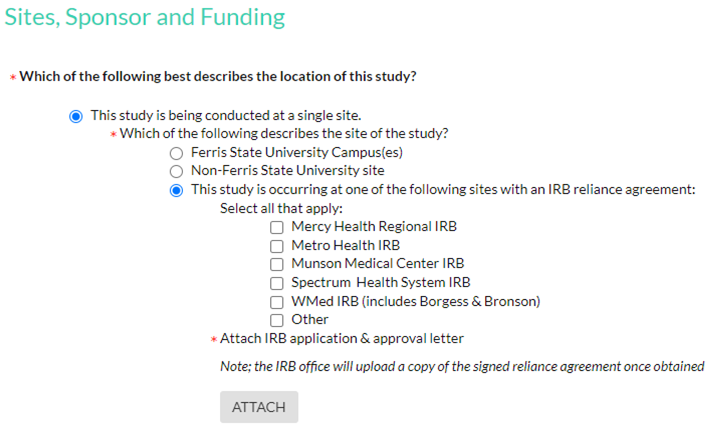