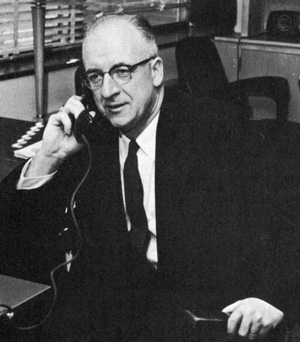 The Ferris Institute was a small, isolated, vocationally-oriented school which had established a fine reputation as a private school when Victor F. Spathelf came as the tenth president in 1952.

Under Spathelf the Institute underwent an unprecedented period of growth. The first wing of the Science Building, which housed laboratories and classrooms for pharmacy and science, was finished in late 1956. The Trade and Industrial Center was completed in 1957. It housed a myriad of trade courses which had been scattered around off campus and in war surplus barracks on campus. The building of Masselink Commons was accompanied by the erection of six apartment buildings for married students. By the the fall term of 1955-56 students found a new "Institute" -- the East (now called Prakken) Building and the Alumni Building served as classrooms, and the West Building as administrative and faculty offices. Masselink Commons was a wonderfully versatile building. It housed 350 students (later an addition was built to accommodate about 90 more); it had a food service unit which provided the daily meals for its residents, and it had a snack bar where residents and nonresidents could get between-meal snacks. In 1956, Helen Gillespie Ferris Hall was added, as were three more Campus Heights buildings. Helen Gillespie Ferris Hall was intended as a women's dormitory. There followed a carefully developed plan which added residence hall facilities to the campus each year for the next decade as the enrollment continued to swell.

Spathelf decided that even though the college offered no majors in music and drama, students should have an opportunity to develop their talents in these fields while they were students. After their graduation they would be able to use whatever talents they had nurtured during their college years as an avocational interest. Thus in 1955 Spathelf employed a director of music with a priority of establishing a comprehensive music program which would accommodate both well-trained and not-so-well-trained musicians into band and choral groups. The idea was to provide for the students opportunities to participate in music groups at whatever level matched their ability. Students could earn credits for music activity electives.

Spathelf also overhauled the academic divisions. By 1961 he had established academic programs which at that time were labeled: School of Commerce; School of General Education, which included the General Education and Pre-Professional Division and the Specialized Education Division; the School of Pharmacy; the Collegiate Technical Division; the Teacher Education Department; and the Trade and Industrial Division. Spathelf also orchestrated the name change from Ferris Institute to Ferris State College in 1963.

Spathelf lettered in track for four years at Wayne State University from 1928-1931. He ran the 440-yard dash and was also a member of the Wayne State Championship one-mile relay team from 1929-1931. Spathelf won first place medals in the Michigan Collegiate Athletic Conference in 1930 and 1931. Spathelf also earned an outstanding academic reputation during his collegiate career. He won both the Howard A. Donnelly and Mackenzie Honor Society Awards in 1931. He also served as his class president for four years.

Spathelf went on to become the Dean of Men at WSU in 1941-1942, then the Dean of Student Affairs from 1946-1950. He became president of Ferris State College in Big Rapids in 1952, the first WSU undergrad to ever become a college president. He remained in that post until 1970. In 1962, he was president of the Michigan Council of College Presidents.