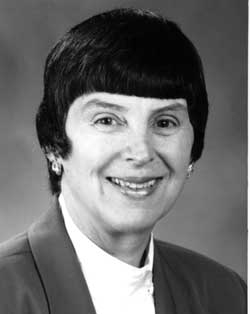 Dr. Helen Popovich served as President of FSU from November of 1989 to June of 1994 and was the first female president of any of Michigan's 13 autonomous public universities. An English literature scholar, she has been published extensively and has received numerous honors and fellowships.

Before coming to Ferris, Dr. Popovich served as president of Florida Atlantic University from 1983-1989: Before FAU she had served as acting president of Winona State University in Minnesota since 1981. When she transferred to Boca Raton in 1983, she came with broad goals for the school, including promoting Broward County expansion and constructing a 52-acre, $60 million research park that would allow businesses and industries to conduct research alongside university pupils and professors.