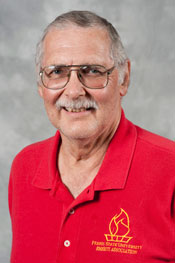 Jim Jacobs first came to Ferris Institute in 1962 as a student to study mechanical drafting. His instructor was Robert Carlson. Early into his second year, he dropped out and joined the United States Air Force. While he was in the service, he began taking business courses, intending to return to Ferris to study accounting. In the fall of 1968, he returned to study accounting and discovered Ferris had a new program called Data Processing which could be taken with the accounting program. While he was attending Ferris under the G.I. Bill, he also worked in the library where he met and married Christine Schmitz, who was his supervisor, in 1972. Jim graduated in 1973 with a major in data processing and a minor in accounting, and was hired by Ferris as a computer operator. In 2000 after more than 26 years, he retired as Supervisor of Computer Operations. Christine retired 2 years ago after 45 years at the library. They have 3 daughters, 2 grandsons, and lots of time together. Jim enjoys fishing, deer hunting, bowling, golfing, and time at the cottage. Jim has been a member of the Emeriti Board since 2001.