The Control Series of work began from questioning personal losses. Although miscarriages are common occurrences they are traumatic and confusing. My vantage point as an expectant father, husband, and artist allows me to use personal source material, and reveal my coping with these tragedies in creative, thoughtful, and playful ways. The miscarriages my wife and I have experienced became catalysts for divergent paths of enquiry.

Our culture presents valuations on lives of unborn children that we can feel pressured to accept. The root of these valuations is the question of when life begins. And if life is present, then what happens to it after it is taken away? I am interested in posing existential questions as one path of enquiry. Due to the complexity of existence and ensoulment in an unborn child and the lack of visual evidence available to me I ask what it is I have actually lost.

When I found out that my wife was pregnant I started to imagine and form expectations for my role as a father. I began to project ideals about fatherhood. How might I and will I participate in the lives of my children? Questions about fatherhood led me to reflect on my childhood. My most vivid memories, and arguably the most important, during childhood were while I was engaged in play and exploration. I compile visual information from memorable toys, places, people, and ways in which I will engage my future children. Some of the places and toys I depict belong to my spouse, which allows me to honor her role and partnership.

The visual cataloguing enables me to then play on the canvas. The picture plane becomes an area where I can activate these different areas of enquiry. Instead of planning the painting out entirely I leave room to respond to imagery, marks, and color. Most notably this happens where multiple pictorial spaces merge together. Two of these spaces are real historical settings and children's spaces. The children's space is characterized by often stylized, flat, repeated imagery occupied by toys and shapes. The real historical space is characterized by illusionistic space of a natural or domestic setting. Where a figure is present the merging areas form a third space that is liminal. Liminality is a state of being in-between positions. Without affixing myself to any singular position I see myself in-between expectation and loss. Picturing liminal space has much to do with how the paint is used.

During my process of painting I acknowledge the plastic qualities of paint. Paint can be applied in many ways and take many different forms to suggest ideas. There are intentional areas where I decide that I want the paint to do something that I cannot control. This layered significance alludes to the natural process of reproduction that we may choose to have little to no control over. Similarly, in coping with grief after a trauma, I must decide how I will deal with the form the paint has taken. Perhaps the most important decisions I make are how I will choose to respond to circumstances whether in hope or despair. 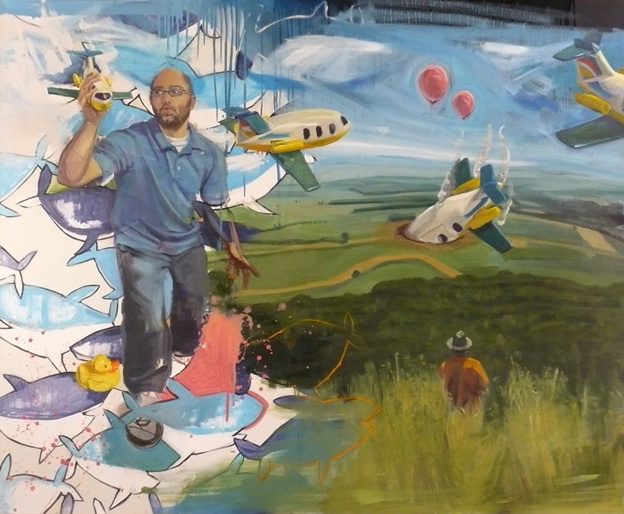 "Plane to Sea, Plain to See"