Ferris Esports is the official home for esports at Ferris. We give our students a place to compete, bond and grow.

Members can compete in a wide variety of games including: Overwatch, League of Legends, Counter-Strike: Global Offensive, Rainbow Six: Siege, Rocket League, VALORANT, or any other game the organization sees fit. Players will compete in registered leagues against other collegiate teams in Michigan and across the United States.

Ferris Esports will only consider reschedules if a team requests one within 24 hours of the matches being published.

If a team reaches out to reschedule within the timeframe stated, Ferris Esports staff will do their best to accomodate by providing options that work for our team, staff and production.

We hold our captains and coaches to these same policies in situations where we must reschedule.

Besides members who compete on either the Crimson or Gold teams for their respective game, members can also be apart of the Esports Production team who help document, create, organize, and host our weekly Twitch broadcasts showcasing the players of the Esports club. We are always looking for members who have great communication skills for Esports Broadcasters, written skills for Esports Communication, and organization skills to host Esports Tournament Events such as “Michigan Bandwidth Bowl” the online tournament against other Michigan Esports Organizations.

Ferris Esports utilizes industry applications and hardware to create the weekly Esports programs which are streamed live to Twitch.tv/FerrisEsports. These broadcasts include skillsets of graphic design, photo editing, and video producing. 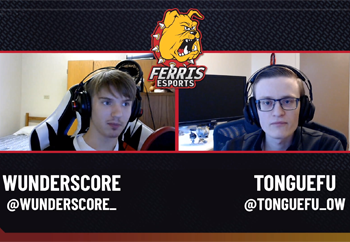 Each Esports broadcast is casted by Ferris students to provide the play by play calls and color commentary giving the view insight on what is happening in-game. Shoutcasting skillsets include sports communication, video production, and public speaking. 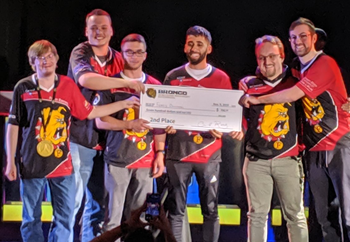 Besides the weekly league matches that are played by the teams Ferris Esports also hosts a Collegiate Esports Tournament called the "Michigan Bandwidth Bowl" which is an invitational tournament where other Collegiate Esports schools compete in a round robin match schedule to earn points for their organization.

The first step in joining the Ferris Esports organization and competing is being a current student of the University. If you're not a student and are interested apply now for free!

If you're already a current student join the Ferris Esports Discord server where all the collaboration with players, coachers, spectators, and University staff is happening.

Once you have joined the Discord introduce yourself and don't be afraid to ask any questions. Ferris Esports is open to all students who are interested in Esports, competitive video games, and spectating events.

Ferris Esports teams compete in several colligate leagues for their respective games. Team tryouts happen before the start of league matches and consist of playing with the current Esports members.

If you are selected to compete on one of the teams you will be expected to follow the team practice schedule, match dates, and code of conduct set by the University.

If you're not interested in trying out for a team but want to support the Ferris Esports players still join the Discord and participate in the Twitch broadcasts by chatting with your fellow Esports enthusiasts. Ferris Esports is also a community of fellow gamers who support the high level of competitive play across all games.

Twitch.tv - Each week Ferris Esports brings you the weekly match ups between Ferris State and the other Colligate organizations around the United States.

YouTube - If you missed the live broadcasts check out the VODs posted on YouTube anytime to relive the excitement and drama of your favorite teams.

Facebook - Stay up to date with happenings of Ferris Esports on Facebook and interact with all the members.

Twitter - Hashtag your favorite clips from Twitch and share them for all to see those amazing play of the games.

Discord - Weekly meetings of the organization are hosted in Discord along with the most up to date happenings with the club.

If you have a disability and require accommodation to participate in this event, contact (Jonathon Eaton, Adviser for Ferris Esports Club) at (231)-591-2806 to request accommodations at least 72 hours in advance.