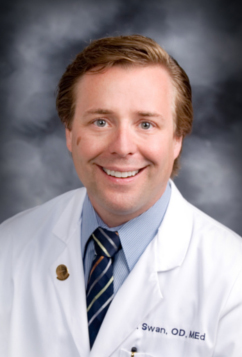 Dr. Swan is a Professor at the Michigan College of Optometry, located at Ferris State University in Big Rapids, Mich., where he teaches courses on pediatric, developmental, and binocular vision (including strabismus and amblyopia). He sees patients with student doctors in the Pediatrics and Binocular Vision Service at the University Eye Center (UEC) Big Rapids Campus. He is the Director of Grand Rapids Clinical Services and serves as Chief of the Optometry Service at Mercy Health – Saint Mary's Campus in Grand Rapids, Mich.

Dr. Swan has served the profession of optometry at the national level having been appointed to several volunteer and leadership positions in the American Optometric Association including the Aviation Vision Committee, Health Information Technology and Telemedicine Project Team, Faculty Relations Committee, InfantSEE state coordinator and the Research and Information Executive Committee. He has also served on the Accreditation Council on Optometric Education and with the Association of Schools and College of Optometry; Binocular Vision and Informatics special interest groups and the Association of Contact Lens Educators.

Dr. Swan earned his doctorate degree in optometry at the Michigan College of Optometry at Ferris State University. He also earned a master's degree in reading disabilities at the University of California at Berkeley School of Education. Additionally, Dr. Swan is a fellow of the American Academy of Optometry (AAO).