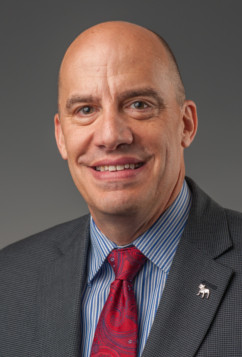 Dr. David A. Damari is the Dean at Michigan College of Optometry at Ferris State University. Prior to his appointment as dean, he was a professor at Southern College of Optometry and the Chair of the Department of Assessment, responsible for institutional review, measures of academic outcomes, quality assurance in the curriculum, and reaccreditation. His is a Fellow and past president of the College of Optometrists in Vision Development and a Fellow of the American Academy of Optometry. He is the only active optometrist to have completed the Fellow-in-Residence program at the National Board of Examiners in Optometry. He has served on several committees on the NBEO, including the Part I Re-engineering Committee, the Examination Restructuring Committee (2002-3) that developed the new structure of the examination, the Psychology/Perceptual Conditions sub-committee, the Patient Assessment & Management (PAM) Authoring Committee, the Part II Exam Council, and the Applied Basic Science (Part I) Authoring Committee. He has taught optometric theory and methods, vision therapy, pediatric optometry, neurological eye disease, and strabismus and amblyopia courses. He is the president-elect of the Association of Schools and Colleges of Optometry.

Dr. Damari is the consultant on visual disabilities to many national and state testing and licensing boards, including the National Board of Medical Examiners (who administrate the US Medical Licensing Examination), the National Board of Osteopathic Medical Examiners, the CFA Institute (who develop and administer the Chartered Financial Analyst Examination in 104 different countries), the Law School Admissions Council, and the Graduate Management Admissions Council. He wrote chapters on visual disabilities in three books, including Accommodations in Higher Education under the Americans with Disabilities Act (ADA), edited by Michael Gordon and Shelby Keiser (GSI/Guilford, 1998). Before his tenure at SCO began in 1997, he was a private practitioner in Rochester, New York, helping hundreds of patients meet their visual needs in education, athletics, and the workplace. Before he started the Rochester practice, he was an associate with Drs. Nathan Flax and A.M. Rappaport in Garden City, New York. He graduated from SUNY College of Optometry and did the residency in Vision Therapy there.